Let’s face it, a Disney Cruise vacation can be a tough sell for Dad.  The Disney fleet of dream liners are more known for their pixie dust versus saw dust.  However, with the overhaul of its original cruise ship, the Disney Magic, the game for Dads has changed.  Yes, Disney has significantly amped up the Dad factor on the Disney Magic with Super Heroes, Pirates, and high speed thrills.  If you’re looking for a pink and purple princess powered sojourn on the high seas, fuggedaboutit… youse guys need to check out the Disney Magic ReImagined for Dad. Disney Cruise Line always embraced their Dad-friendly pirate roots with a Pirates IN the Caribbean party where Disney characters with guests cosplaying as pillaging and plundering pirates.  But now, in addition to pirates, Disney has added super heroes to the mix as well. 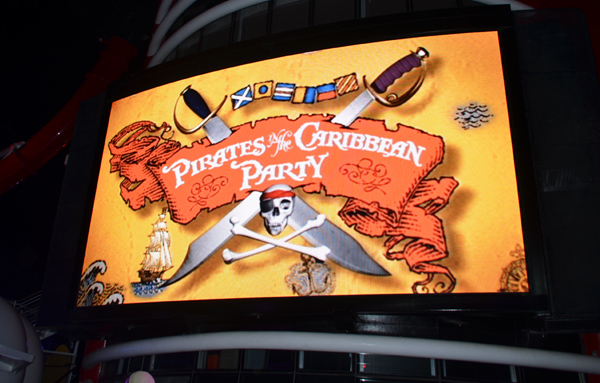 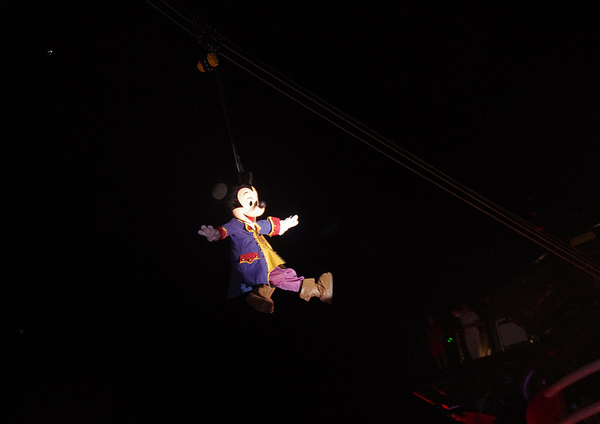 One of the most buzzworthy parts of the ReImagined Disney Magic ReImagined is the Avengers Academy, where kids can digitally step into and control Iron Man’s suit.  [Note: this is the same technology that debuted earlier this year at Disneyland; click here for a detailed review.]  After consulting with Captain America, kids become S.H.I.E.L.D. agents and set off on a mission to defeat Red Skull and his evil cabal.  Who hasn’t draped a blanket over their shoulders at some point and dreamed of becoming a super hero?  This new Oceaneer Club experience now brings that dream to life.  The only problem for us overgrown boys (aka Dad) is the Oceaneer Club is limited to ages 3-12. Here’s a tip for Dads – check out the Oceaneer Club upon boarding the Disney Magic.  The kids club has an open house allowing parents to experience the surroundings and activities with their little ones.  Dads can play with… um… I mean inspect for safety purposes… all the elements of the Avengers Academy during this open house period.  You know, Dad has to make sure little junior can’t drop Thor’s Hammer on his foot, right? 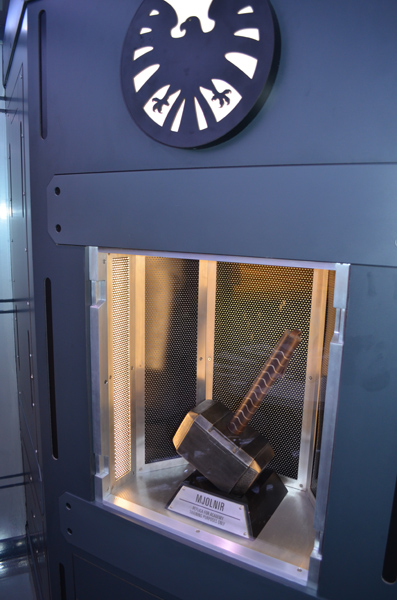 In addition, Captain America will have meet and greet opportunities throughout the cruise; so Dad’s have the opportunity to meet the First Avenger too.  And take it from me, the character interaction with this super hero is first rate.  My daughter was shy about meeting Captain America (which was strange because we were only there because of her, not Dad, right? weird…); he introduced himself to her as Steve Rogers from Brooklyn, New York.  We’ve been there! And biked over the Brooklyn Bridge as a family.  The same bridge Steve Rogers told us he ran across every day as a scrawny kid.  When I commented how steep the bridge was, he replied, “I know, that’s why I did it!”  Yes, that was some “Disney Magic” right there… Next up on our Dad tour of the ReImagined Disney Magic is the upper deck, where we hear the screams and feel the splashes of guests on Donald Duck’s AquaDunk – a high speed thrill slide that stuffs you into a clear coffin-like tube looking out 100+ feet above the ocean before opening the floor out from underneath your feet.  Oh boy… oh boy… “3… 2… 1… Anchor’s Away!”  Wait, did Donald just call me an anchor?  Why, I oughta…. 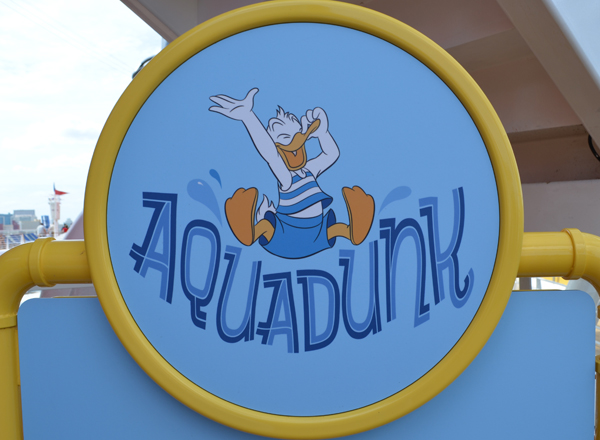 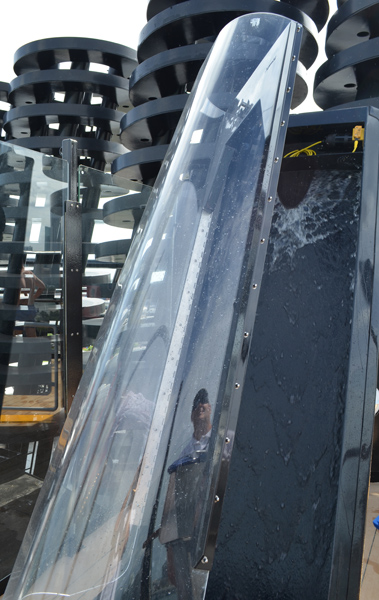 AquaDunk riders free fall nearly three stories during the quick, thrilling 7-second ride.  My daughter had to muster up a little nerve to give it a try, but once she did, she loved it.  AquaDunk’s fast drop is sure to please Dad.  As an added bonus there is the amusing backstory of Huey, Dewey, and Louie building the slide to torment their Uncle Donald that you can enjoy in storyboard progression as you climb the stairway.  Yeah, that’s what Donald gets for calling me an anchor… After your super hero adventuring, AquaDunk plunging, and pirate plundering, Dad is sure to have worked up a hunger and thirst.  The Disney Magic ReImagined for Dad has you covered there too.  Want a place to grab a pint and check out the game?  Head to O’Gills Pub, an Irish themed tavern with dark woods, rich upholstery, and plenty of screens featuring live televised sporting events.  You’ll be yelling “Ole, ole, ole” with your mates before you know it. Nothing says “Dad food” like grilled meats – and Carioca’s is Disney’s answer to the Brazilian steakhouse.  Evoking the Carnival spirit of Rio de Janeiro, down to the black and white waved sidewalk pattern of Copacabana Beach (click here for my visit to Rio), dining at Carioca’s will speak to Dad’s macho Latin side. 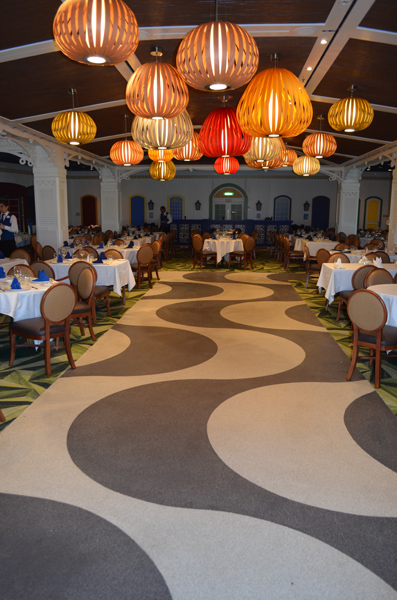 The restaurant’s signature dish, Jose Carioca (named for Donald’s parrot pal in The Three Caballeros), is an assortment of grilled meats including lamb, steak, and Brazilian sausage speared on steaming hot skewers.  No vegetable side needed for this carnivore’s delight, instead – a side order of Tiger shrimp!  Oh yeah, that’s right!  This Latin macho, super hero Dad ate a Tiger…  shrimp. Am I reading too much into the guy factor additions on the ReImagined Disney Magic?  Possibly, but consider this… the flagship of the Disney fleet always featured male characters from stem to stern - from Mickey on the bow to Goofy on the stern.  Now the dude cruise is accentuated further with the Helmsman Mickey statue as the focal point in the lobby.  Yeah, I’d say that’s a pretty strong statement as to who this ship was really ReImagined for… how about you? However, the ultimate way the ReImagined Disney Magic pleased Dad was this… of course, the changes and additions were designed not just for Dad, but for the whole family.  And watching your child enjoy all the new spaces, food, and shows is what makes this Dad the happiest. 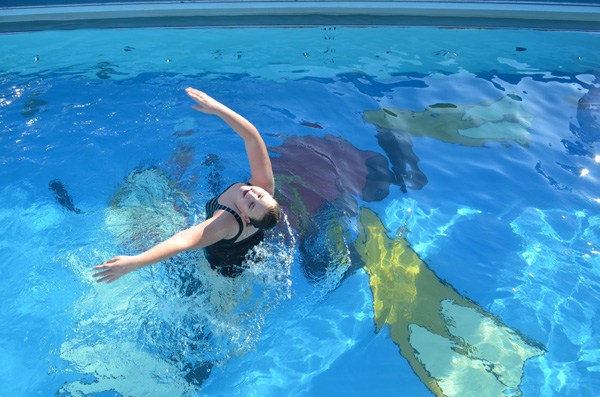 For more pictures of the Disney Magic ReImagined for Dad, check out the gallery below.  Note: the photo gallery requires Flash Player, click here to view all the photos from the ReImagined Disney Magic  if your device is not Flash equipped.

DISCLOSURE: Dave and Evie Parfitt were hosted by Disney Cruise Line for the purposes of writing this review.  However, all opinions expressed are those of the author.  For more family travel news, reviews, and trip reports, be sure to follow Adventures by Daddy on Twitter and “like” our Facebook page, too.