There are exciting new things happening every day at Universal Orlando Resort in Florida! Join us every week to read about what’s new “Around the Universe.” This week’s Universal Orlando News update features: social media meet-up event for the Celebration of Harry Potter, 1 day free ticket discount, Butterbeer recipe and more! New! Celebration of Harry Potter Social Media Meet-Up: A Celebration of Harry Potter is just a few weeks away and Universal Orlando has announced there will be a special Social Media Meet-Up event taking place during the same weekend. Attendees for the Social Media Meet-Up will be selected through some type of contest, but the details on how to enter have not yet been announced. Winners will receive credentials to the event, which will provide an inside look at some of the art and artistry that has brought Harry Potter to life in The Wizarding World of Harry Potter. The lucky winners and their guests will tour the grand marble hall of Gringotts Wizarding Bank with Alan Gilmore, Art Director for a number of the Harry Potter films and visionary for the new attraction in Diagon Alley, Harry Potter and the Escape from Gringotts. Then attendees will descend into the bank vaults to meet with MinaLima, the design team responsible for bringing the Daily Prophet, and more, to life. There will be a chance for Q&As at both stops before embarking on an adventure with a ride on Harry Potter and the Escape from Gringotts. There may even be another surprise or two along the way! We can’t wait to find out all the details!

New! Mardi Gras Coming Soon: Take the best traditions of The Big Easy, an amazing concert line-up, and all the excitement of Universal Studios Florida, and you’ve got the makings of the biggest party in Florida. Universal Orlando’s Mardi Gras is sixteen nights of toe-tapping music, sizzling Cajun and Creole cuisine, and beads by the handful. Each night features one of the biggest names in music live in concert, a dazzling parade, outrageous street performers, and more. 2015 Mardi Gras celebration will take place select nights Feb 7 through April 18. The concert lineup hasn’t been released yet, but we will share it as soon as it is.  Click here to get a glimpse of Universal’s Mardi Gras event. 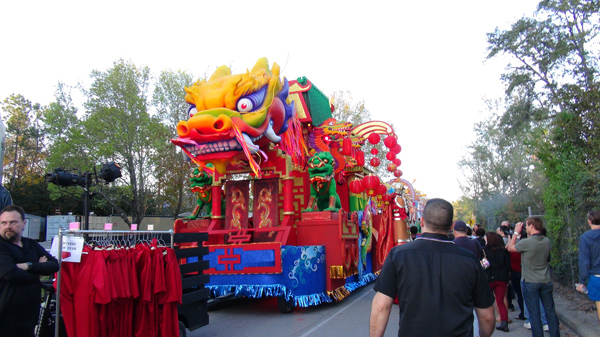 Reminder! Buy Two, Get third Day Free Offer: Back in October, Universal Orlando Resort announced the return of the resort’s popular 3rd Day Free Offer for U.S. and Canada residents – giving them a third day FREE with the purchase of a 2-day park ticket. This offer gives visitors even more time to enjoy the trip of a lifetime to Universal Orlando’s two theme parks, Universal Studios Florida and Universal’s Islands of Adventure. Offer valid for purchase through June 7, 2015 and is valid for 14 days from the first use – must be used in full by June 20, 2015. Current price of a 2-day, park-to-park ticket is $175.99 per adult, plus tax. New! Jake’s Beer Dinner at Loews Royal Pacific Resort: Visit Jake’s Friday, January 23 at 7:00pm  for a uniquely local dining adventure! Enjoy a four-course dinner featuring Unibroue beer. Each course will be specially created and paired with a selection from Unibroue by our award-winning chefs. For reservations and more information, call the concierge at 407-503-3200. Tickets are $65.25 per person.

Reminder! Universal and Loews Hotels Announce New Hotel Coming to Universal Orlando in 2016: When it opens in the summer of 2016, guests visiting the new Loews Sapphire Falls Resort at Universal Orlando will walk into a colorful Caribbean hideaway built around a lush, tropical lagoon and towering waterfall. The new hotel will become the fifth on-site resort hotel and its 1,000 rooms, including 77 suites, will bring the number of on-site hotel rooms at Universal Orlando to 5,200. New! See Jim Jeffries at Hard Rock Live: Actor, writer, producer and comedian Jim Jefferies, has appeared on numerous TV shows in England including Channel 4’s The History of Offensive Humor, BBC1’s Heaven and Earth, and ITV2’s Comedy Cults. U.S. audiences got their first taste of Jefferies when he appeared on HBO’s Down and Dirty with Jim Norton which in turn lead to his critically acclaimed and international hit one hour HBO special, I Swear to God.  He followed that up with a Showtime special titled Alchoholocaust and Fully Functional on The EPIX Network. See Jim Thursday, January 15, 2015 at 8:00 pm. Tickets are $37.50. Doors open at 8:00 pm. Are you thinking about planning a vacation to Universal Orlando Resort? Request your free, no obligation quote on the right side of the page or click on the banner below.