It may have taken fourteen months for the Frozen train to pull into the Disneyland Resort, but they’re full steam ahead and making up for lost time with new shows, character experiences, a dance party, and more.  To be fair, the Frozen characters were first introduced to Disneyland Resort park-goers just before the film’s November 2013 release with Olaf hosting World of Color: Winter Dreams, and an Anna & Elsa meet and greet in Fantasyland, but fans just couldn’t get enough.  Week after week, Frozen merchandise would disappear from shelves as soon as it was stocked, and the line to meet the sisters consistently seemed to require at least a half day commitment.  Fast forward to last summer, as the icy juggernaut took over Disney’s Hollywood Studios in Walt Disney World with their Frozen Summer Fun, which included a (small) parade, a snow play area, an ice skating rink, and a character led sing-along, Disneyland simply re-purposed a float from their Christmas Fantasy Parade making Anna & Elsa the warm up act for the daily Soundsational parade.  Months later, the powers that be at the Disneyland Resort have created their own enhanced version of Frozen Fun in Disney California Adventure, and they didn’t just stop there.  There’s also a new Frozen stage show in Disneyland, a brand new miniature Arendelle in Storybook Land, and even a Gallery exhibit featuring concept designs for the film.  Continue reading for photos and details of all the new Frozen experiences at both Disneyland Park and Disney California Adventure. Anna & Elsa warm up the parade crowds during Halloween Time at Disneyland.

Frozen Fun takes place in Hollywood Land at Disney California Adventure, and is currently scheduled to run through May 2015 - although, I wouldn’t be surprised if we saw some (or all) of these experiences extended well beyond that date.  Here, you can meet Anna, Elsa, Olaf and Marshmallow (although, not all together), sing your heart out in a character led sing-along, go sledding in real snow, dance the night away at the new Freeze the Night! dance party, and more.   Below is a list of all that Frozen Fun has to offer, including which experiences require a FastPass. Anna & Elsa’s Royal Welcome: Anna & Elsa’s meet and greet has moved from Fantasyland over to the Animation Building inside California Adventure.  Located in the Character Close-Up section, this space used to house the Toy Story zoetrope and has been completely transformed to replicate the inside of the royal castle.  Guests looking to meet the sisters will need to head to this location to receive a FastPass with a scheduled return time, I’d suggest arriving as early as possible.  FastPass only, no stand-by line. 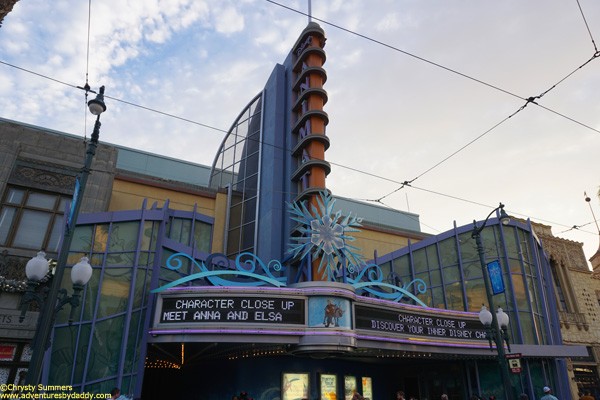 Do you want to draw a snowman?

For the First Time in Forever - A Frozen Sing-Along Celebration: The Frozen gals have taken over the theater that used to house Muppet*Vision 3D and have re-named it the Crown Jewel Theatre.  Anna, Elsa, Kristoff and a few citizens of Arendelle lead the audience in a sing-along featuring music from the film’s soundtrack.  FastPass machines are located just outside the theater, and are encouraged, though not required.  Disney’s website indicates the ownership change is temporary and that it’s currently only scheduled to last through May, but this is one of the experiences that I think may continue on beyond that.  The changes to the theater are much more than just a simple overlay, both inside and out. Both FastPass and stand-by are available. 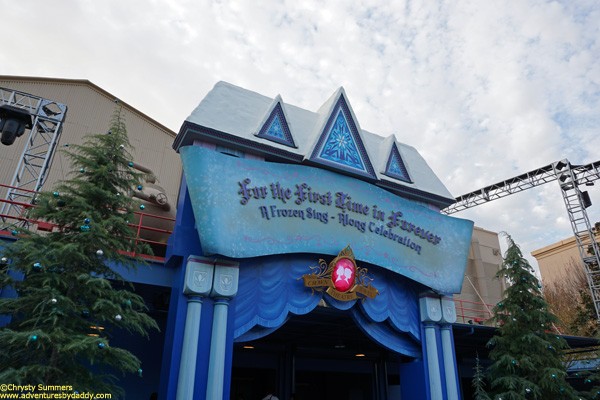 New mobile FastPass machines located to the right of the theater entrance.

Wandering Oaken’s Trading Post: Not really an attraction, but the outdoor shop just outside of the Crown Jewel Theatre has been taken over by Mr. Oaken and is full of Frozen goodies.  Remember when you couldn’t find any Frozen merchandise anywhere? Not even in the parks? Those days are long gone now. Olaf’s Snow Fest:  This is a little tricky because there are two lines. One if you want to experience the snow play area where you can go sledding (this counters WDW’s ice skating), listen to a live band play, have a Frozen themed snack or,  you guessed it, buy even more Frozen merch.  Then there’s a second line if you’d like to meet Olaf. Yep, you can MEET OLAF! Unlike at Walt Disney World where you can only catch a glimpse of him up on a stage or in a parade, you can actually give your favorite snowman a big warm hug! No FastPasses, but they are handing out restaurant-style pagers so guests can roam the immediate area. Olaf’s meet & greet is located in the back, and is accessed through a separate entrance than the snow play area. Several Frozen themed snacks are available exclusively inside Olaf’s Snow Fest, including this build your own snowman cookie kit. Freeze the Night!: Billed as a “family dance party”, this turns all of Hollywood Land into a giant night club as the clock strikes dusk.  Unfortunately, I wasn’t able to stay through the night to see the area after dark, but there’s a DJ, a dance crew, specialty themed snacks & beverages (alcoholic & non), and even a meet & greet with Elsa’s bodyguard, Marshmallow, all ready to party the night away. Entrance to Freeze the Night! An open space during the day, but gives guests plenty of room to shake a tailfeather after dark. Moving over to the original Magic Kingdom, Frozen has found it’s way into the park in a few different places.

Snow Queens: Art of Ice | The Disney Gallery: Located in the lobby of the Opera House on Main Street, USA, this new Gallery exhibit features beautiful concept designs from a never-realized Snow Queen based attraction by Disney Legend Marc Davis, along with background and character designs used in the making of Frozen.  The Gallery continues to be a great spot to escape the hustle & bustle of the parks and this exhibit is a must-see. Most of the pieces on display are available for purchase in the Art-On-Demand kiosks, you can ask a Cast Member for assistance. 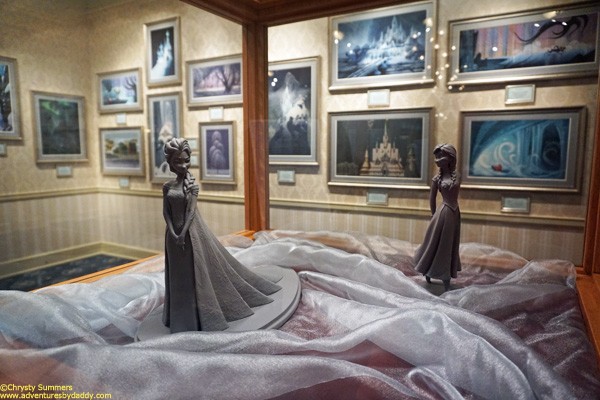 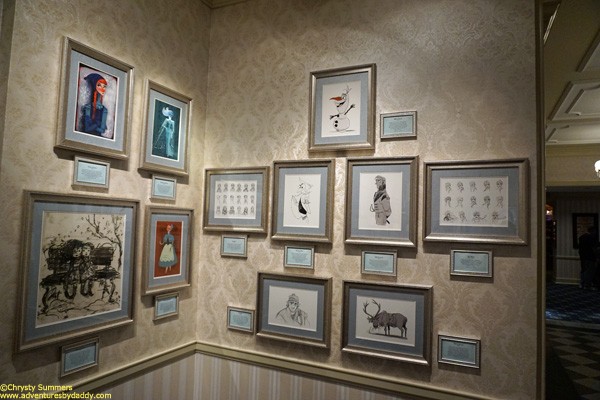 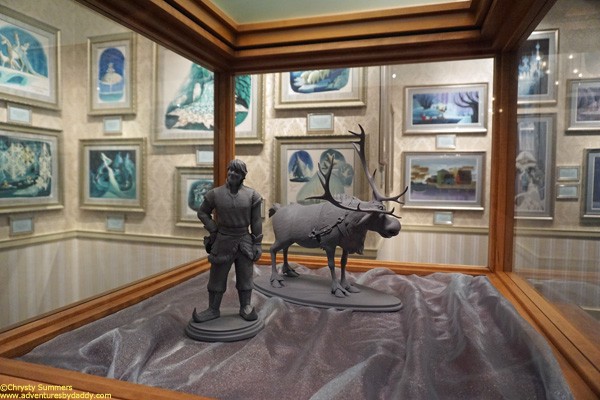 Kristoff & Sven maquettes. It’s nice to see the fellas from Frozen getting a little love.

Storybook Land Canal Boats | Fantasyland: Arendelle has been given a permanent home inside the attraction, and it’s a perfect addition to this miniature wonderland.  Although the lines for the boats can run kind of long (usually 30-45 minutes), so if you don’t mind skipping the spiel you can also see the Frozen village from the Casey Jr. Circus Train, and from multiple vantage points. The addition of Arendelle includes the Wandering Oaken’s Trading Post and Elsa’s Ice Castle up in the North Mountain. A closer look at Arendelle.

The Royal Theatre | Fantasy Faire: Admittedly, I’ve saved the best for last.  When I heard a new Frozen show would be taking over both the Tangled and Beauty & the Beast shows inside Fantasy Faire, I wasn’t thrilled with the idea.  While I enjoyed the film and loved the soundtrack, I’ve been feeling a little thawed out by all the Frozen mania, but this show single-handedly rekindled my love for the film.  I even found myself wanting to listen to the soundtrack all over again afterward.  Just as with the previous shows, Mr. Smythe and Mr. Jones act as the storytellers with the help of some really clever props (notably for Elsa’s “magic”), along with Anna and Elsa. Fastpasses are available from a mobile dispenser set up in the Hub (near the Partners statue), across from Fantasy Faire, and are strongly recommended if you’d like a seat for the show. There is limited standing room just outside the theater. Mobile Fastpass machines set up for the show near the Partners statue. The Royal Theatre. Check the times guide for show times. 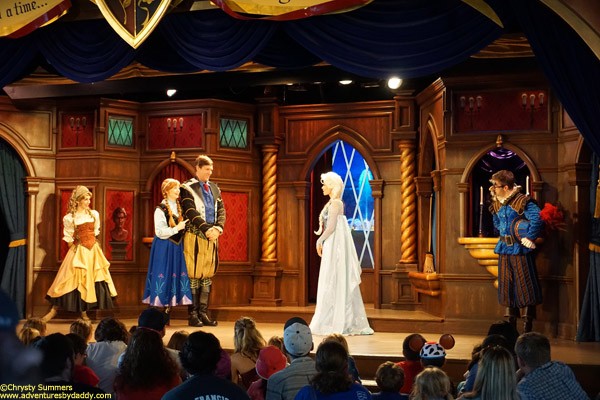 An act of true love. HUZZAH!!

For even more photos from around the parks, you can click on the gallery below (note: Flash player is required to view the gallery).

Finally our friends Sarah and Richard Woloski at Skywalking Through Neverland discuss the new Frozen Fun editions to Disneyland on Episode 61, and you can get their opinions starting at 17:49 minutes into the show.