Since its first publication on October 2nd 1950, Charles M. Schulz’s “Peanuts” comic strip has been cherished by millions of loyal fans around the world.  Being someone who grew up with the Peanuts - reading the daily comic in the newspaper and watching the holiday specials every year - I got a little worried about what might be done to these beloved characters when a major Hollywood studio got their hands on them in order to make a big budget feature film.  After all, I remember what happened to other childhood favorites of mine, Scooby Doo and Underdog, when they made their big screen debuts and let’s just say that it wasn’t pleasant.  Thankfully my fears have not been realized and THE PEANUTS MOVIE has turned out to be a wonderful film for all ages.  What makes it wonderful?  The filmmakers over at Twentieth Century Fox and Blue Sky Studios obviously have a genuine affection for the comic strip and it shows.  The material is treated with such care that the resulting movie is always smart, often laugh out loud funny and genuinely as heartfelt as the original material that it’s based on.  Mr. Schulz would be proud.  Continue reading for more of our spoiler-free THE PEANUTS MOVIE review. 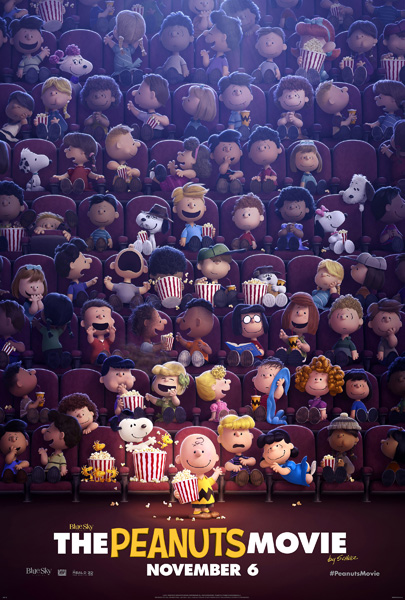 The story is rather simple.  When the little red-haired girl (one of my favorite characters from the strip) moves in next door to Charlie Brown, he must try to come to terms with his own insecurities to let her know how he feels.  It may sound a little too simple, but as much as this may be the main plot of the film, the story is really more about the friendships that Charlie Brown shares with the other characters and how they relate to each other as they make there way through the films many challenging moments.

Fans of the comic strip will appreciate the nostalgic feel that the film has to offer.  Writers Bryan Schulz, Craig Schulz and Cornelius Uliano effectively stay true to the spirit of the original strip, as well as the individual characters that admirers have always loved.  The comic itself works as a blueprint for the film, as the movie revisits all of the relationships and themes created by Charles M. Schulz, without ever feeling unoriginal or outdated.  Audiences are given everything from the kite-eating tree to Sally’s crush on Linus to Lucy’s 5¢ (inflation hasn’t reached the world of Charlie Brown yet) Psychiatric Stand.  It’s all there. Wanting to respect the look of the comic strip as well, Director Steve Martino (HORTON HEARS A WHO?) and his amazing team of animators have brought a little extra to the visual style of the film.  Using the comic as not only a blueprint to the story, Martino also showcases the comic strips look in the artwork.  At first glance, the digital animation comes off as no different then any animated movie given to us by studios such as Pixar or Dreamworks, but as viewers look closer they will notice an interesting use of a comic strip style of line art that adds an interesting dimension to the visuals.  This allows the film to have a modern day animation style that still stays respectful to its comic strip roots.  I especially liked the scenes where Charlie Brown begins to remember past events.  Here the animators choose to utilize a black and white comic strip approach straight out of the newspapers to visualize this.

As nostalgic at the film is though, anyone being introduced to the Peanuts characters for the first time are sure to fall in love with them.  The cast of characters remains as relatable as ever and even though we never lose sight of the fact that it’s Charlie Brown’s story, the other characters are never lost in the background.  Linus, Lucy, Peppermint Patty, Schroeder, Marcie and even Pig Pen are all given their moments to develop as characters.  This well-rounded choice of character development allows the viewers an opportunity to not only grow to care about them as individuals, but also as a group of real friends.  It also helps that the cast of voice-over actors are made up of actual children instead of famous adult actors given their best child like impressions.  Noah Schnapp is especially good voicing Charlie Brown.

The most interesting part of the movie though is when it takes a step away from the children’s story and Snoopy’s adventures with the Red Baron are allowed to take center stage.  As he sits down at an old fashioned typewriter to write his WWI novel we enter into Snoopy’s imagination where he takes to the air, flying around on his doghouse to face off against his archenemy, the Red Baron.  As he swoops through the sky, flying past the likes of the Eiffel Tower, the movie picks up its pace and gives us some thrilling moments and great visuals that the younger audiences are sure to love. THE PEANUTS MOVIE is a sweet, often funny, always smart, and genuinely heartfelt moviegoing experience.  Fans of the comic strip, as well as the old television specials will enjoy revisiting the characters of Charlie Brown, Snoopy and the rest of the gang in a movie that respects its creator, Charles M. Schulz, as well as the world of characters that he created.